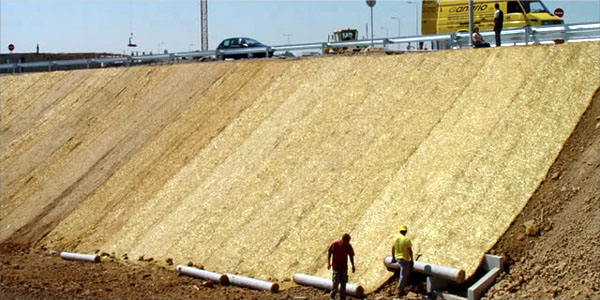 Huge Potential for Geo-Textiles – Significance of Jute Felts from PARK

Geotextiles are primarily the permeable fabrics used in association with soil, increase the ability to filter, separate and reinforce, drain, or protect. To enhance the strengths and increase durability, needle punched staple fibre manufacturing technique is produced which increase survivability. There has been renewed focus on the use of natural fibres like Jute as a geotextile for underlaying the rural roads and for soil erosion control.

India is one of the largest producers of natural fibres and their use in geotextiles has led to overall cost savings and good technical results.

Geotextile could be a synthetic material such as Jute, Polyester, Polypropylene, and others, is also used with soil, rock and other geographical engineering-related material and is called geosynthetics. In the making of roads, in particular, these are used in high-standard all-season roads. Geotextiles extend the service like roads, increase their load-carrying capacity. These Geotextile products have a wide range of applications and are currently used to advantage in many civil engineering applications including roads, railroads, embankments, retaining, structures, reservoirs, canals, dams, bank protection, coastal engineering.

Here are some of the primary uses of Geotextiles, namely:

Soil erosion is one form of soil degradation and a naturally occurring process on all lands. Hilly, deserts and coastal regions are more prone to severe soil erosion making them severely vulnerable. In hilly areas, the phenomenon of natural slope, hilly and coastal regions are severely vulnerable to it. Since it is a relatively slow process that goes unnoticed and occurs at an alarming rate causing serious loss of topsoil followed by land sliding. There is a serious loss of lives, livestock and infrastructure, houses, markets and structures due to this vulnerable soil. This clearly shows that the economic consequences of erosion are also becoming severe.

Globally, there are economies that have formulated clear guidelines for the implementation the technical textiles in their usages in specific applications. Our Government is also in the process of firming up guidelines and standards and specifications to use geo-textiles products and projects where they are used. Also, state Governments and Governments across nations have their own concessions on several features to invite investment and entrepreneurs in this field.

Natural fibres such as jute and sisal are being in vogue into geotextile fibres in environmental protection projects. Jute is gaining immense popularity especially in Australia and other nations rather than the polymers in areas where their biodegradation is required while enabling seedling protection for hill slope protection.

Geo-synthetics are gaining popularity across the world in the waste management industry as they offer isolation and protection [prevent leakage] to the surrounding soil substrate. It goes without saying that geotechnical textiles are poised to command a big domestic market as more and more methods are utilized to make it popular.

The U.S. remains number one for geotextiles. Asia is comparable and followed by Europe and South America. In all these markets it is important to look at the specifics of demand in particular national areas, barriers and distribution. It is always important to pursue detailed market research covering markets now rather than in the past.

At present, the expectation is that the current markets will continue to grow, and new emerging trends will offer long term potential in addition to current markets. As for Jute Felt for geotextiles, there is a wide range of scope for use of existing products in road construction, golf courses, embankments, and other landscaping.

Jute Felt from PARK is a fabric of matted, compressed jute Fibers and sometimes mixed with Fibers. Jute Felt extremely popular and rigorously being increasingly used as an industrial good, especially for insulation and Acoustic. These Jute felts are completely Bio-degradable and strong products and degrades without leaving harmful traces. The Jute felt absorbs moistures, upto 5 times of its own weight, which is useful for plantation, landscaping in dry periods.

SIGNUP TO OUR NEWSLETTER

Stay up to date with our latest product news